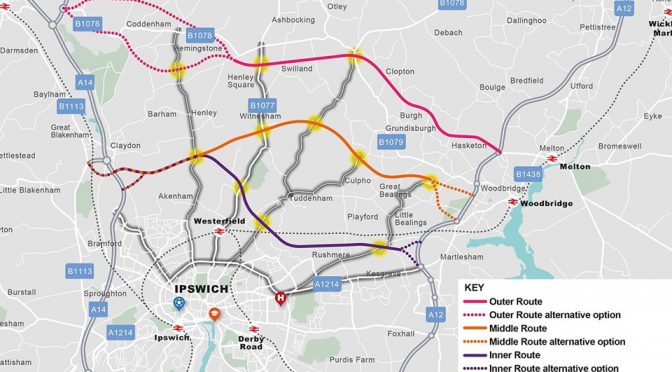 More roads, less buses, millions wasted on consultants and residents deprived of vital services  for want of a  hundred thousand or so – despite declaring a climate emergency, County’s strangely dual attitude to money and transport continues this month..

The decision to cut £340,000 from the subsidised buses budget was made in February, when the Council agreed on the budget for the current financial year. I spoke against this cut at the time, as well as other cuts that will affect bus users such as the decision to no longer print bus timetables. It seems that  not everybody listened.More details of which routes will be affected can be found at: http://www.suffolkonboard.com/

The council says that it will be engaging with bus operators to determine whether any routes can continue to run without council funding. I will keep you updated with further developments, but, as ever warn you: use it or lose it. And once lost, it is hard to bring a bus service back!

I have also written to our MP, Therese Coffey, to ask her to support a national bus strategy. I have not yet had any word from her in response.

Consultation for Ipswich Northern Route  Suffolk County Council announced suddenly that it is consulting on options to create a new road to the north of Ipswich  – a decision made apparently before the last election Babergh and Mid Suffolk District Councils, East Suffolk Council and Ipswich Borough Council, with support from West Suffolk Council, The claim is apparently that this would enable better journeys across Suffolk as well as enable future “growth”. 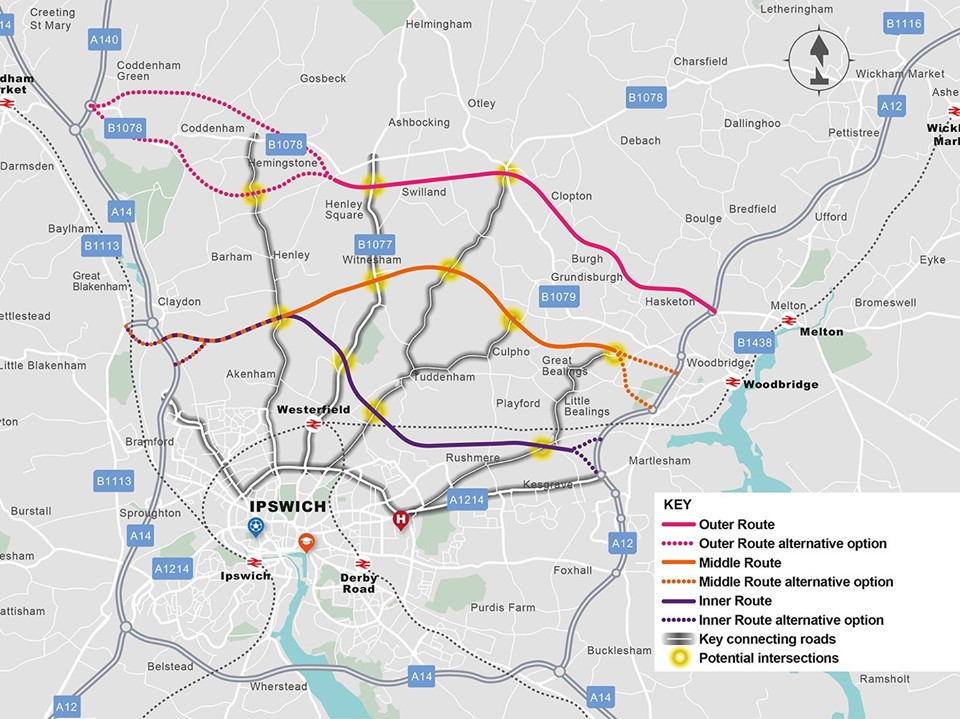 The three potential routes for a new east/west link between the A12 and A14  a) from Martlesham to Claydon, b) Woodbridge to Claydon, and c)  Melton to the A140 near Needham Market. All of these routes will have a significant impact on the alreadly congested roadfs around Woodbridge and its surrounding districts.

Apart from this, I am concerned at the cost and how it can possibly be managed. As you can see from elsewhere in this report, the county council hasn’t got the money to fulfil its current commitments, and Highways England is reluctant to spend it. The minimum cost for this road is currently quoted at £500,000 – with estimates rising up to as much as £1bn.This in a county that has maintained for years that it is committed to growth, yet cannot afford £100,000 for roadside bus timetables!

Additionally, while supporters of a bypass scheme want it to relieve congestion in Ipswich, the government has said that to attract funding the scheme would need to unlock further housing growth  north of Ipswich rather than exist to solve the towns traffic problems.  We are looking at 10,000 to 15,000 extra houses declared – and possibly more.This scheme therefore seems to be the tail wagging the dog.

As such I am seconding a motion against this at the next meeting of the County Council , suggesting that the money spent on looking at such a scheme should be more profitably spent on sustainable transport solutions.

A public consultation allowing members of the community to comment on the project runs from Friday July 5 to Friday September 13.  There will be a number of public drop in sessions. Locations closest to Woodbridge are:

There is a  campaign to stop this route. Details can be found at https://stopipswichnorthernbypass.co.uk/

SCC releases breakdown of Upper Orwell Crossing spend  The final costs of the abandoned Upper Orwell Crossings project have been released, and show that Suffolk County Council spent a total of £8.1m before deciding to not build the Crossings.  Of this, over £4m was paid in fees to consultants. My group do not feel this sits comfortably with the claim that ‘tough decisions had to be made’ when it came to county cutting £half a million from Suffolk’s rural bus transport in February or its suddent attack of entrepreneurial vim and vigour shown over the  new Northern Route proposals.

All rather ironic when one considers the devastation a Northern ROute would cause.

This follows the Ofsted and Care Quality Commission reinspection earlier this year, when Suffolk County Council’s SEND services were deemed to have made insufficient improvement.

The Department for Education has published figures showing that Suffolk County Council exceeded the legal time limit of 20 weeks for issuing new education, health and care plans (EHCPs) in 75% of cases in 2018. This means that hundreds of children were left waiting for the appropriate support and is a significant increase compared to 2017, when 53% of cases went beyond the legal time limit.

Suffolk County Council has admitted that there needs to be rapid improvements to this process, and in the last few months it has managed to increase the proportion of EHCPs completed within the legal time limit to 42.5%.

Reports that health visitor numbers will be cut   It was reported in the Guardian and Observer newspapers that Suffolk County Council is planning to dramatically reduce the number of health visitors in Suffolk in order to make savings.

These plans have not been shared with councillors or the public yet, however the media claim to have seen internal SCC documents showing that the number of health visitors will be reduced by 25% through redundancies in order to save £1m. Health visitors would also have a reduced workload and only focus on the most vulnerable families, rather than all families in Suffolk. The rest of their current workload would need to be picked up by nurses or social workers. I have been contacted already by several residents concerned by this.

These areas of overspend were mitigated by underspends in other directorates.

Suffolk Junior Road Safety Officer awards  I attended the awards ceremony for this last week, and was very proud  of Woodbridge’s

Kyson School  whose JRSOs gained silver certificates in helping promote Road Safety awareness. If you have passed by, you may have noticed  banners up around the school gates asking parents to park and drive considerately? This was part of it. This is definitely how to change road behaviour at grass roots level! I do hope the other Woodbridge primary schools will join this scheme too

Miscellaneous   I am chasing county highways officers about where we are with the Thoroughfare scheme. Back in March I agreed  to fund the next stage:

I have since had it confirmed  by Highways Officers that this is in the pipeline – I have even an end-date of December confirmed.g, despite several reminders.

I am funding a bus shelter at the Cherry Tree west-bound stop, which is a chilly, windy and unsheltered place to wait at any time of the year.

You will be pleased to hear that St Mary’s School has now found and employed a lollipop person.

My surgery is on the third Saturday of July as usual. Just a reminder, it breaks for August.

This site uses Akismet to reduce spam. Learn how your comment data is processed.

What would Dolly do? Fund research into COVID vaccines and buy over 100 million books to support literacy. What a legend. Happy birthday to a woman who gives being blonde a good name. https://twitter.com/netflix/status/1351561199515697154

Happy Birthday Dolly Parton — a true icon who has spent her life inspiring generations with her music and her actions. So the next time you’re feeling low, ask yourself:

What Would Dolly Do?

stage 6 will be messy

Tell me about it.
"It's not fair on tutors & students for *your* daughter to have seizures in *their* classroom."
Phone call to me, as mum, from tutor. No warning. No reasonable adjustments. Within 10 years
No names, but she came w/ #epilepsy bc they were disability-friendly

Tonight's TV: BBC documentary Silenced: The Hidden Story of Disabled Britain uncovers how disabled people were shut out of society for decades https://buff.ly/3p27BhK

I'm done with cycling. Just been attacked by 2 men in a small silver car. Drove at me on Wexford Road without leaving space. Then reversed at me to try to run me over. Then his passenger threw his drink at me. Shouting about why didn't I see he was a car & get out of his way.

It would be interesting to watch Cabinet feed their own offspring on what is their offer more vulnerable children #FreeSchoolMeals https://twitter.com/libdemdaisy/status/1349011245320593408

This website uses cookies to improve your experience while you navigate through the website. Out of these, the cookies that are categorized as necessary are stored on your browser as they are essential for the working of basic functionalities of the website. We also use third-party cookies that help us analyze and understand how you use this website. These cookies will be stored in your browser only with your consent. You also have the option to opt-out of these cookies. But opting out of some of these cookies may affect your browsing experience.
Necessary Always Enabled

Any cookies that may not be particularly necessary for the website to function and is used specifically to collect user personal data via analytics, ads, other embedded contents are termed as non-necessary cookies. It is mandatory to procure user consent prior to running these cookies on your website.