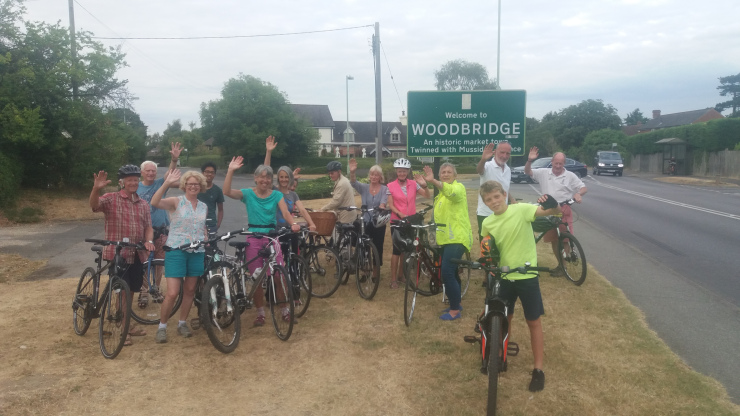 The Conservative administration at Suffolk County Council  agreed yesterday to a motion proposed by the Liberal Democrat, Green and Independent Group to develop a strategic costed cycling plan.  The motion, seconded by LibDem leader Caroline Page, and proposed by Green Robert Lindsay  first asked for a strategic, costed five-year cycling plan to be drawn up for Suffolk.  It secondly asked  for a commitment of 5% of the annual Integrated Transport Block (the equivalent of £160,000) to be spent on cycling infrastructure.
Both motions were vital: without a  commitment of funding, it will be impossible to implement a cycling plan. However, the Conservatives refused to commit any funding whatsoever  to cycling infrastructure – thus managing to have their fiscal cake and eat it.
In the past SCC used to have a cycling team and  a costed cycling infrastructure plan – which was allocated funds from the Transport budget every year.
Back in 1995 the then Country Councillors voted to fully support plans to develop the Sustrans’  National Cycle Network routes in Suffolk and steady progress was made with this for several years.
A cycling budgets also benefits other modes of travel:
1) Most off-carriageway cycle infrastructure is designed to be of equal benefit to pedestrians e.g. shared use cycle paths; Toucan crossing; bridges  – therefore ‘Safe Routes to School’ (for both cycling and walking).
2) More cycle commuters means less traffic on roads, leading to better journey times for those who really need their vehicles.
Since 2011, Suffolk and Ipswich were eligible for six sustainable travel grants from the Department for Transport, yet did not win a single one of these. By failing to commit a minimal amount of funding, it is likely that any future bids for funding will likewise fail.

This site uses Akismet to reduce spam. Learn how your comment data is processed.

This website uses cookies to improve your experience while you navigate through the website. Out of these, the cookies that are categorized as necessary are stored on your browser as they are essential for the working of basic functionalities of the website. We also use third-party cookies that help us analyze and understand how you use this website. These cookies will be stored in your browser only with your consent. You also have the option to opt-out of these cookies. But opting out of some of these cookies may affect your browsing experience.
Necessary Always Enabled

Any cookies that may not be particularly necessary for the website to function and is used specifically to collect user personal data via analytics, ads, other embedded contents are termed as non-necessary cookies. It is mandatory to procure user consent prior to running these cookies on your website.